After yesterday's Disney Investor Day 2020, we can certainly say the future is looking bright for the Direct to Consumer division of the Walt Disney Company. Before the announcements and previews even started pouring in yesterday, DIS closed at it's highest-ever price and at the time of writing this article, DIS is up 9.33% in the pre-market the day following the announcements. It was announced that Disney Plus, which will house a vast majority of these new projects, will be increasing in price by one dollar from $6.99 to $7.99 in March of 2021 for the U.S. market. There's a LOT to cover from various studios including Lucasfilm, Marvel, Pixar, and Disney Studios, over 100 in total, and D23 has us covered. so let's get started!

And Disney Television Studios is currently in production on four live action series set to debut on Disney+ in 2021: 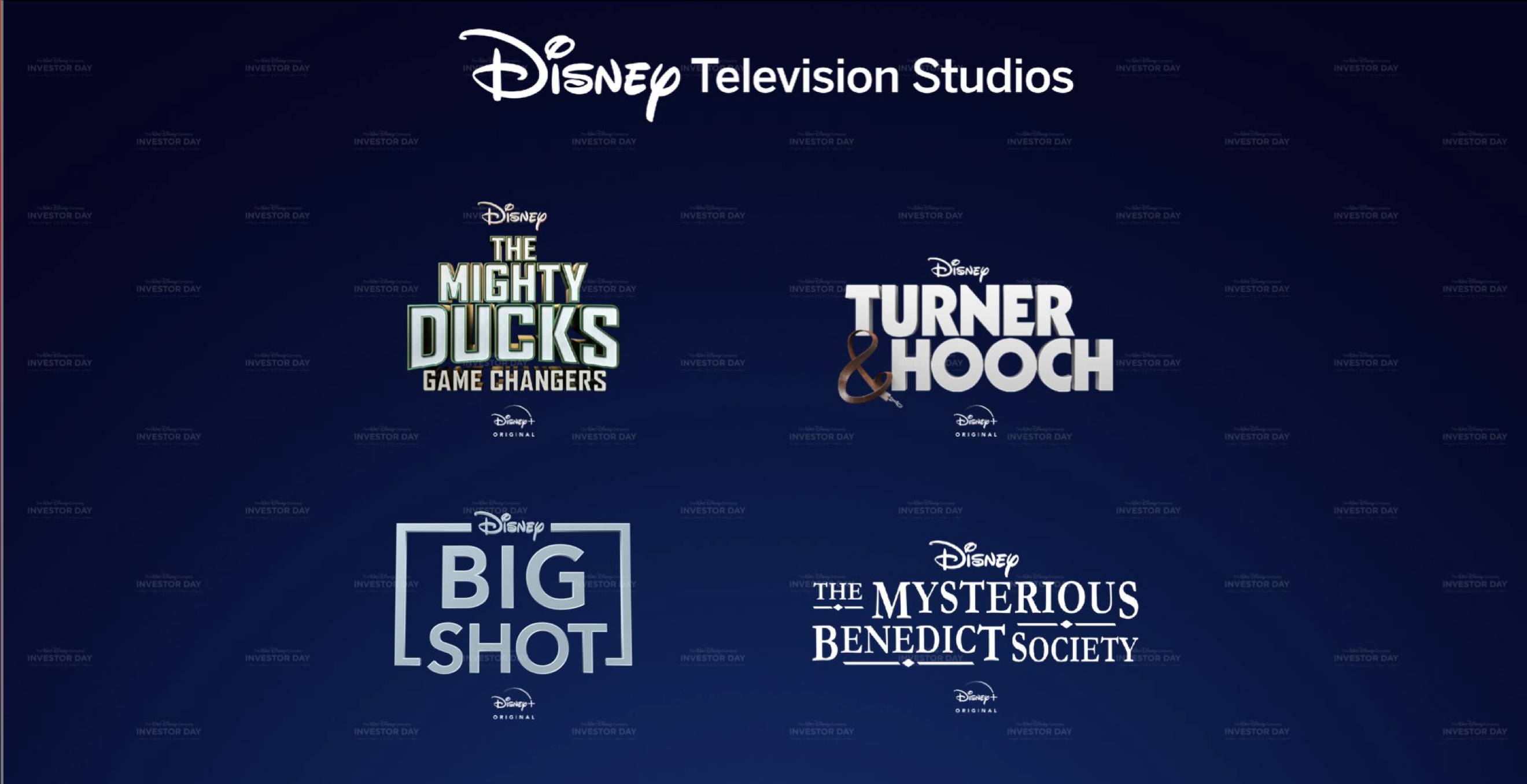 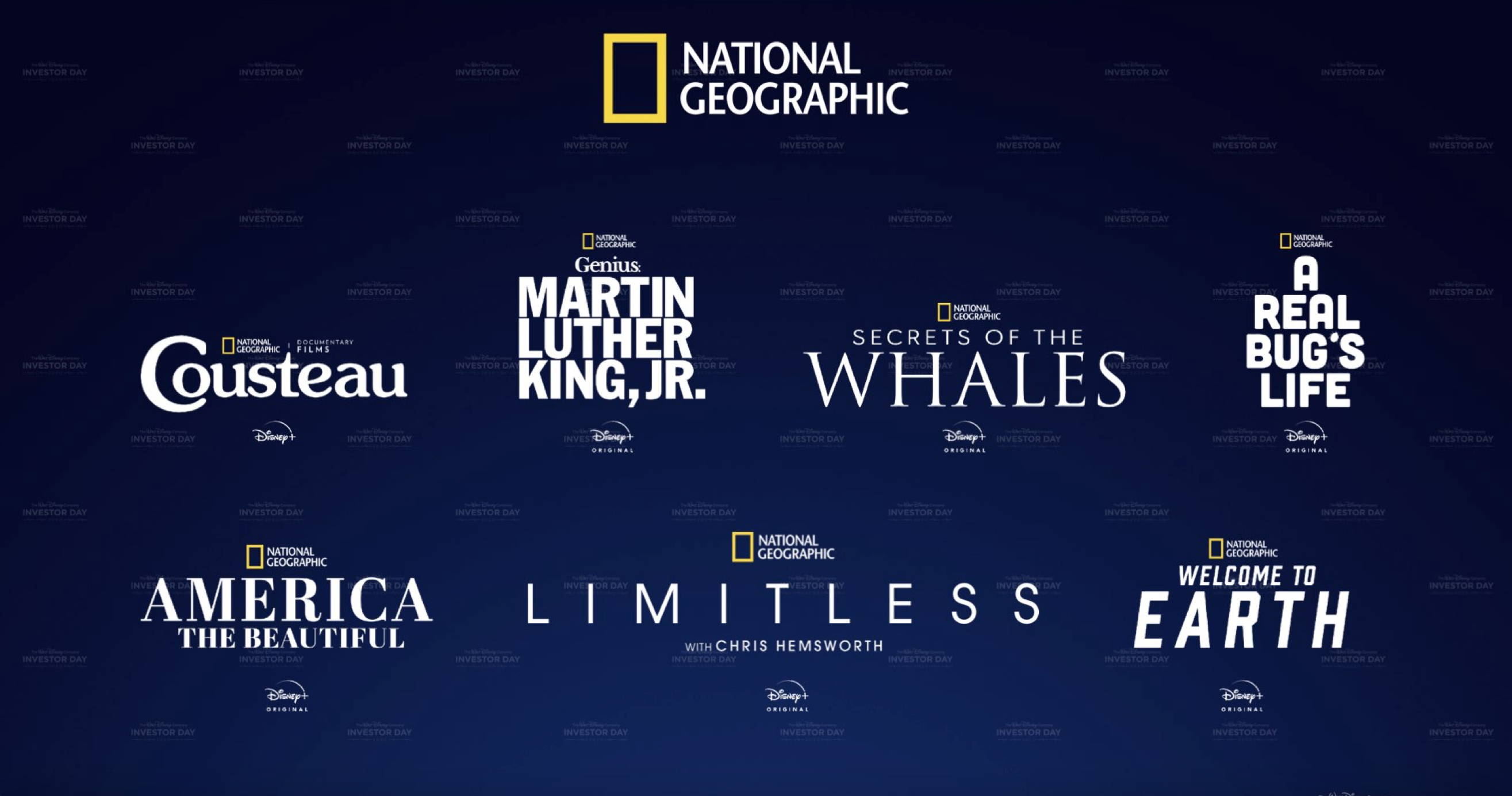 Content for Hulu and Star
Under a multi-year deal, the Kardashian Jenners will create new global content that will stream exclusively on Hulu in the U.S. and internationally on Star, with an expected debut in late 2021. Next year, Hulu and Star are also set to premiere the premium series Only Murders in the Building, which reunites two comedy icons: Disney Legend Steve Martin and Martin Short, who will be joined by Selena Gomez; The Dropout, which tells the story of the con artist that captured the world—Elizabeth Holmes, played by Kate McKinnon; and Dopesick, a new drama series inspired by true events with a cast that includes Michael Keaton, Peter Sarsgaard, and Rosario Dawson.

A slate of FX originals, including The Old Man, American Horror Stories, Platform, Reservation Dogs, and Y: The Last Man will be available on Hulu in the U.S. and Star in multiple international markets in 2021.

It was announced today that ahead of its eagerly anticipated season four premiere, Hulu’s award-winning hit drama series The Handmaid’s Tale has been renewed for a fifth season. 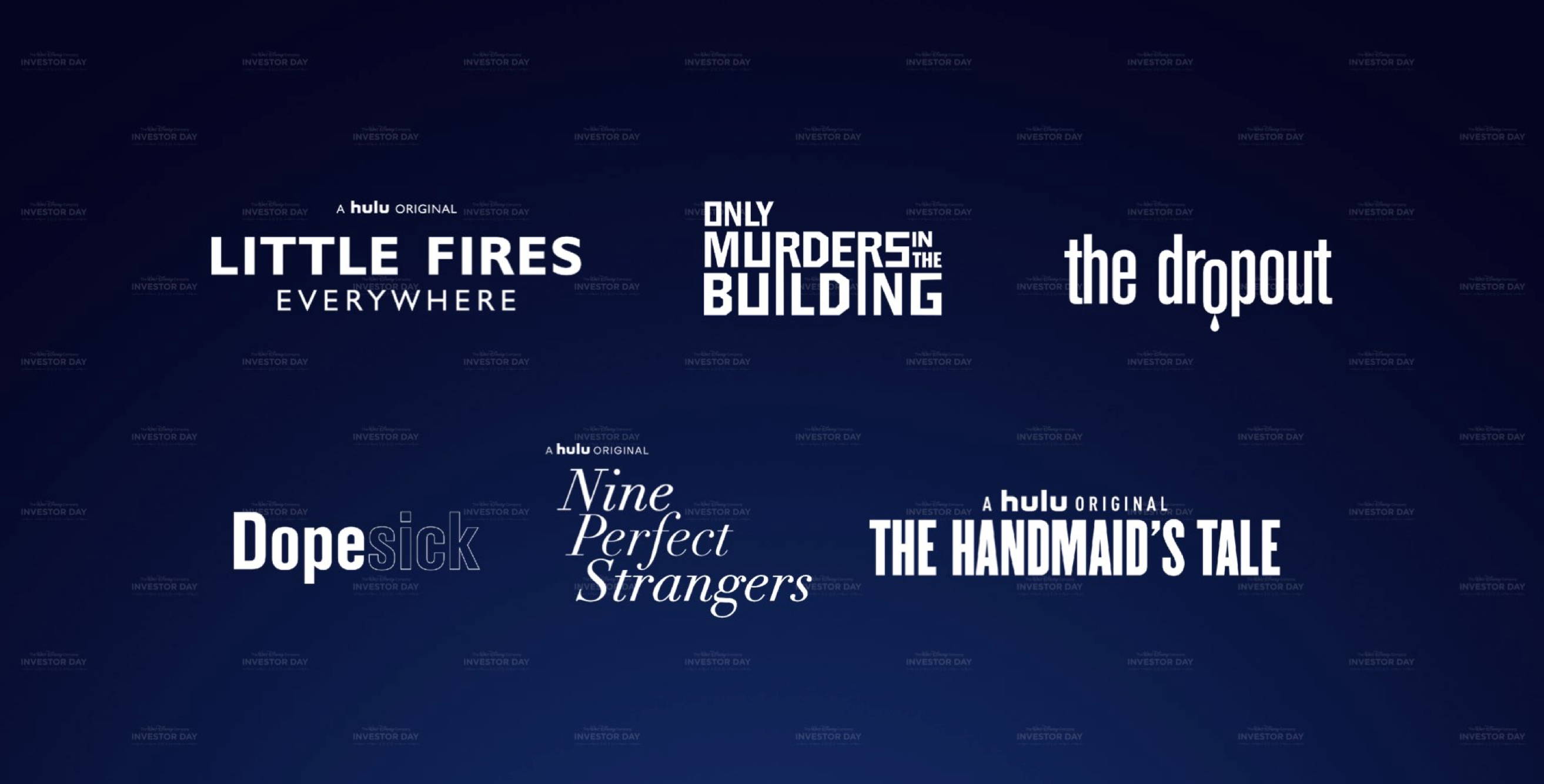 Additionally, Nicole Kidman will star in Nine Perfect Strangers, which she executive produces with David E. Kelley. Look for that on Hulu next year.

In addition to Hulu in the U.S., the FX premium content brand will bring its library of award-winning content and exclusive new originals to Star around the world. 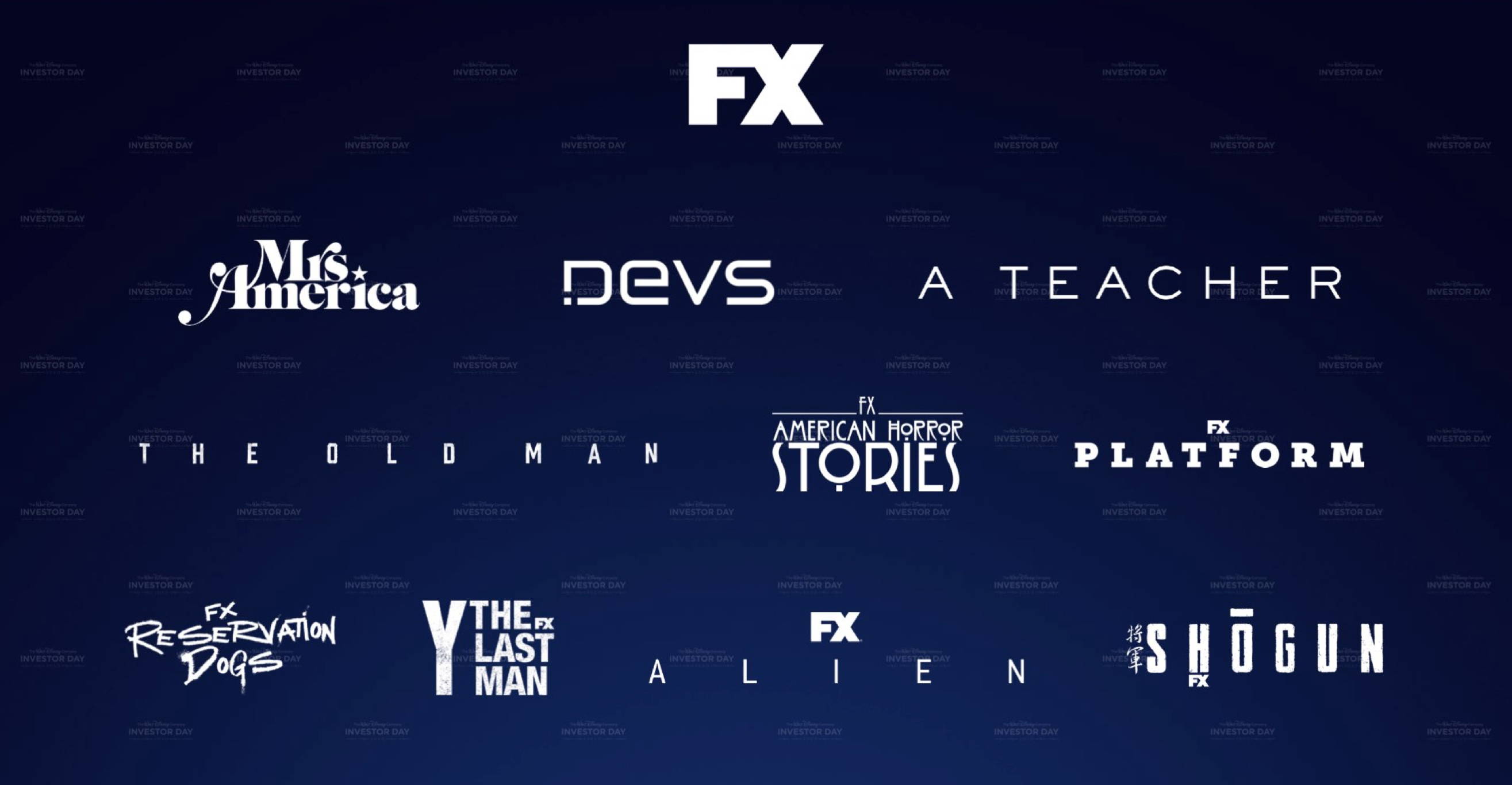 Investor Day 2020 is the way to a host of thrilling announcements from Lucasfilm that look ahead to exciting Disney+ series and new feature films destined to expand the Star Warsgalaxy like never before! Among the projects for Disney+ are Obi-Wan Kenobi, starring Ewan McGregor with Hayden Christensen returning as Darth Vader, and two series set in the Mandalorian era from Jon Favreau and Dave Filoni: Rangers of the New Republic and Ahsoka, a series featuring the fan favorite character Ahsoka Tano and starring Rosario Dawson. 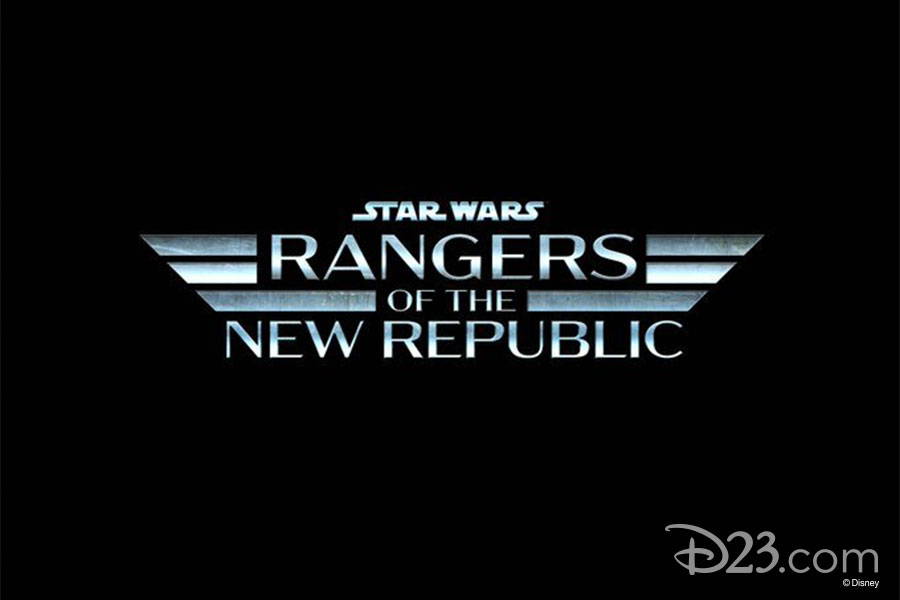 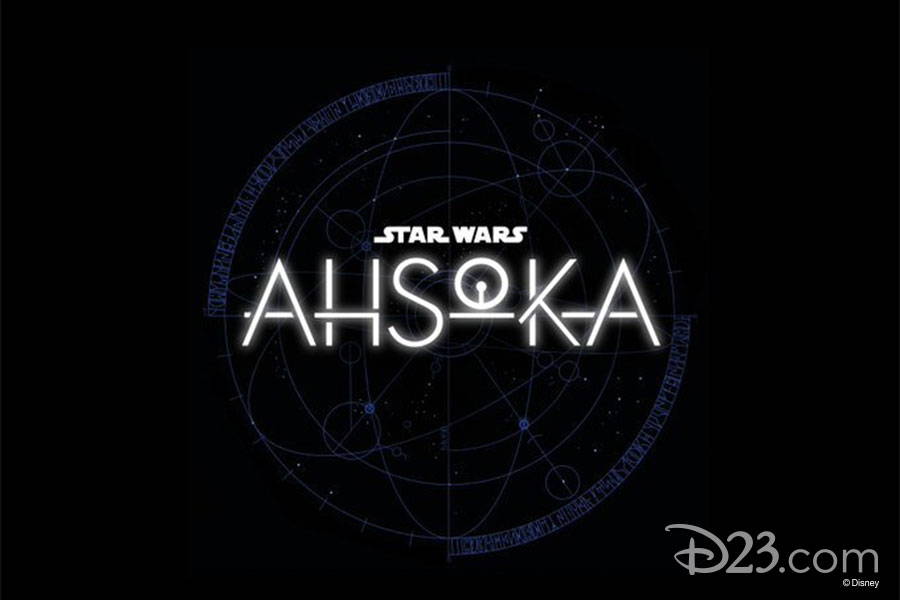 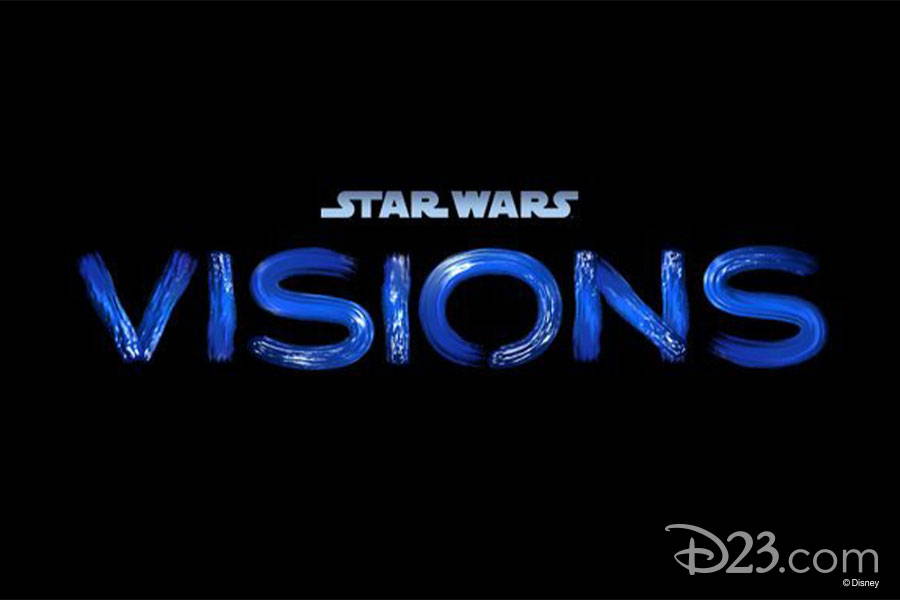 The studio is also revisiting Willow in a new series with Warwick Davis returning in the title role. 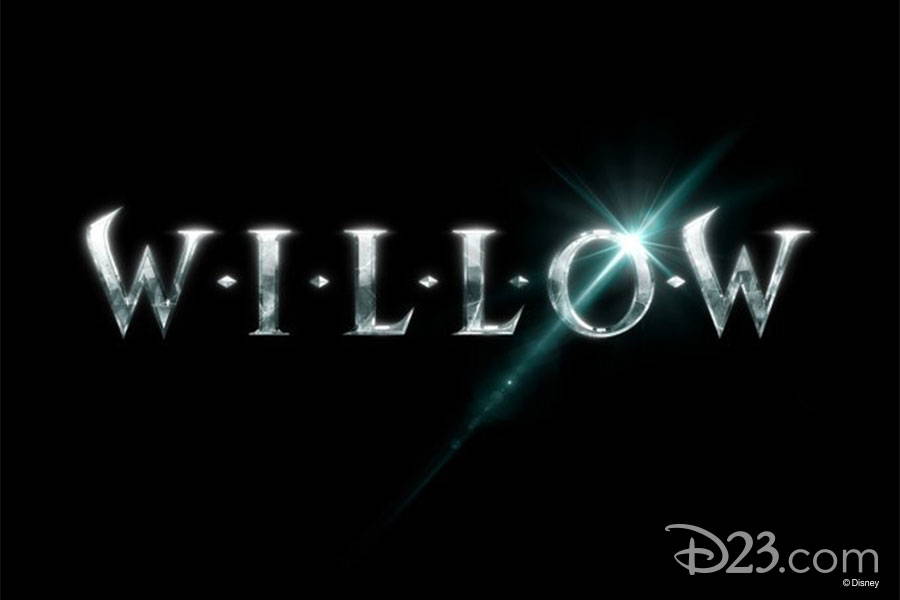 And fans are advised to set their coordinates for December 2023 and the next feature film in the Star Warsfranchise: Rogue Squadron, to be directed by Patty Jenkins of the Wonder Woman franchise.

Also announced today was the next installment of the Indiana Jones franchise directed by James Mangold, a Star Warsfeature film by writer/director Taika Waititi and Children of Blood & Bone, based on Tomi Adeyemi’s New York Timesbestselling novel, to round out the feature-film slate. 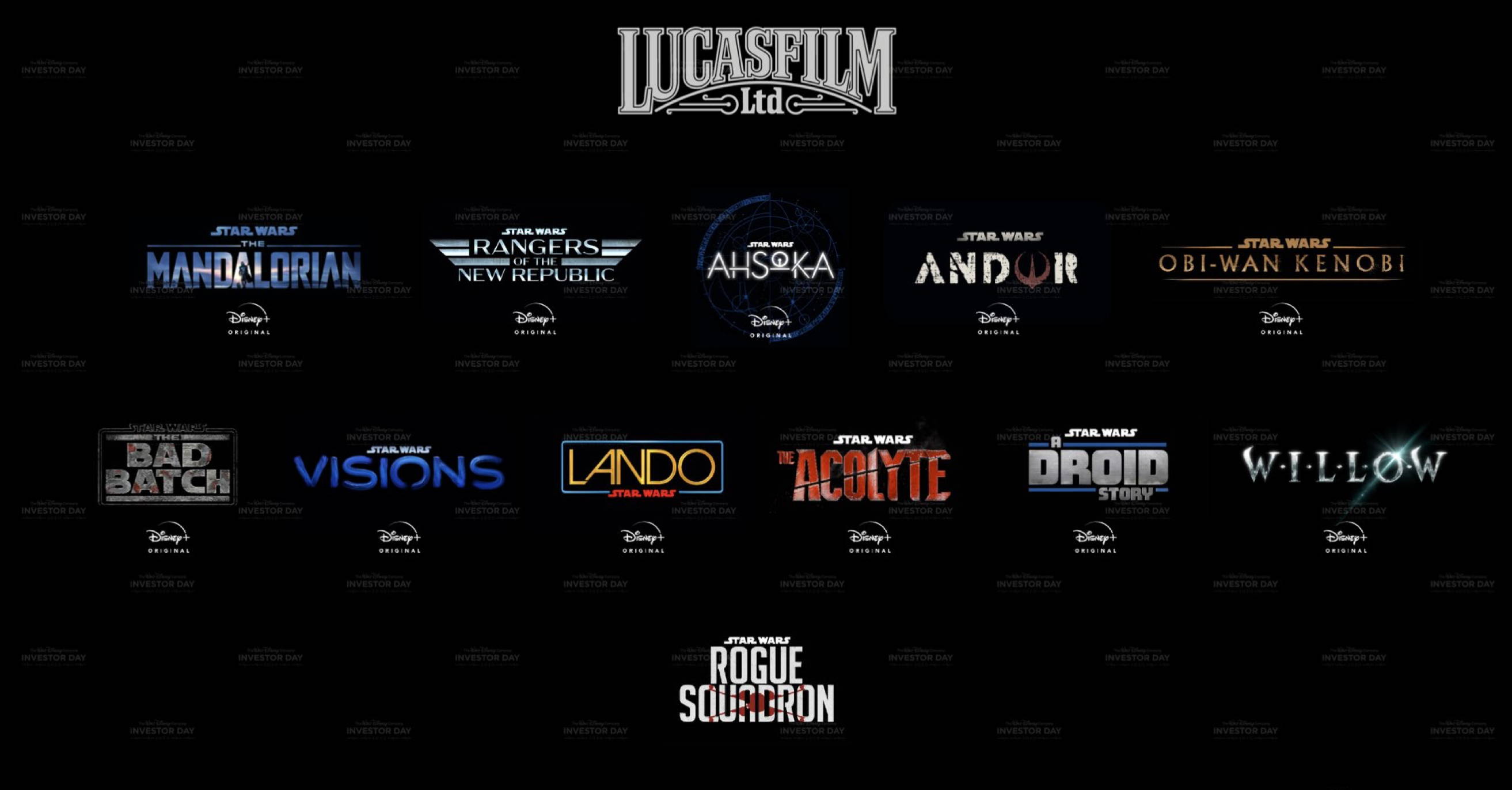 An unbelievable star-studded lineup of original movies is in the works for Disney+, including:

But that’s far from all. Additional Disney+ projects revealed include: 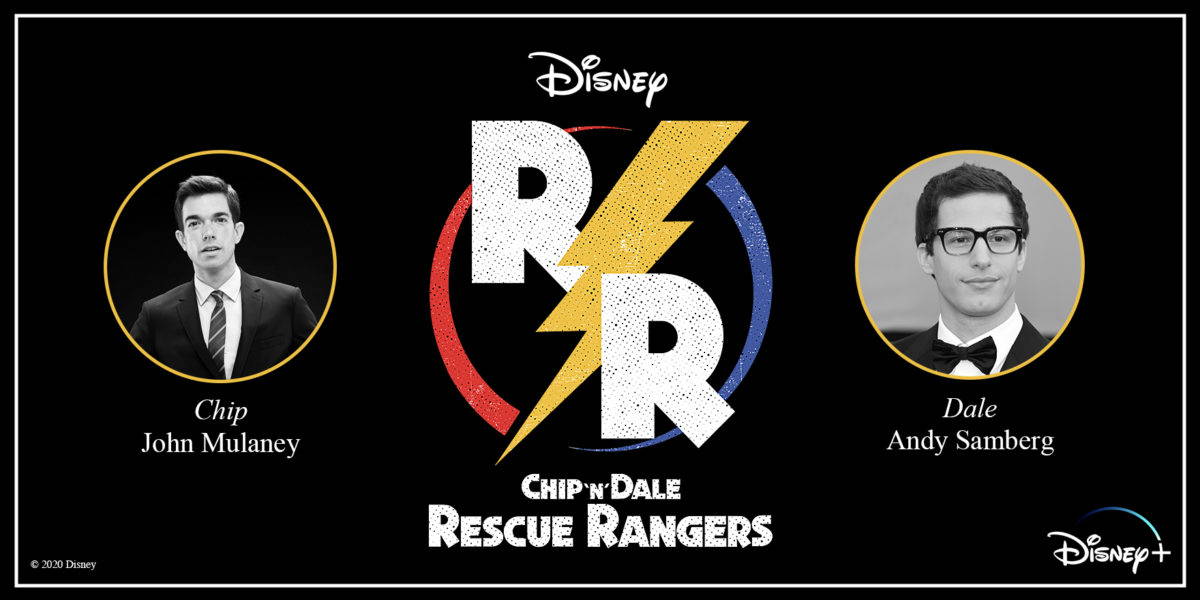 New live-action biographical films set for the service include:

Today’s presentation also included a preview of upcoming feature films such as Jungle Cruise; Cruella; a prequel to The Lion King; and The Little Mermaid. 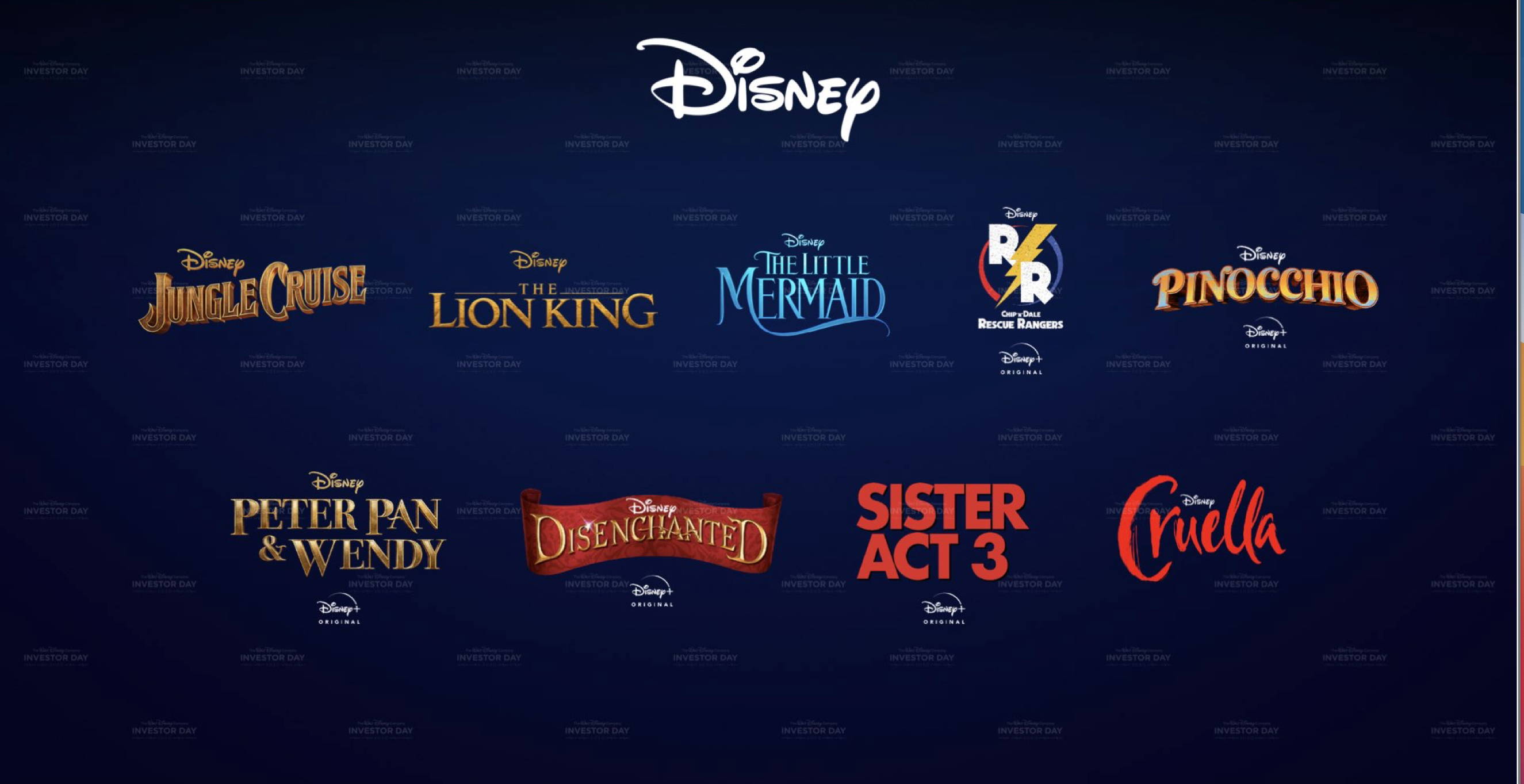 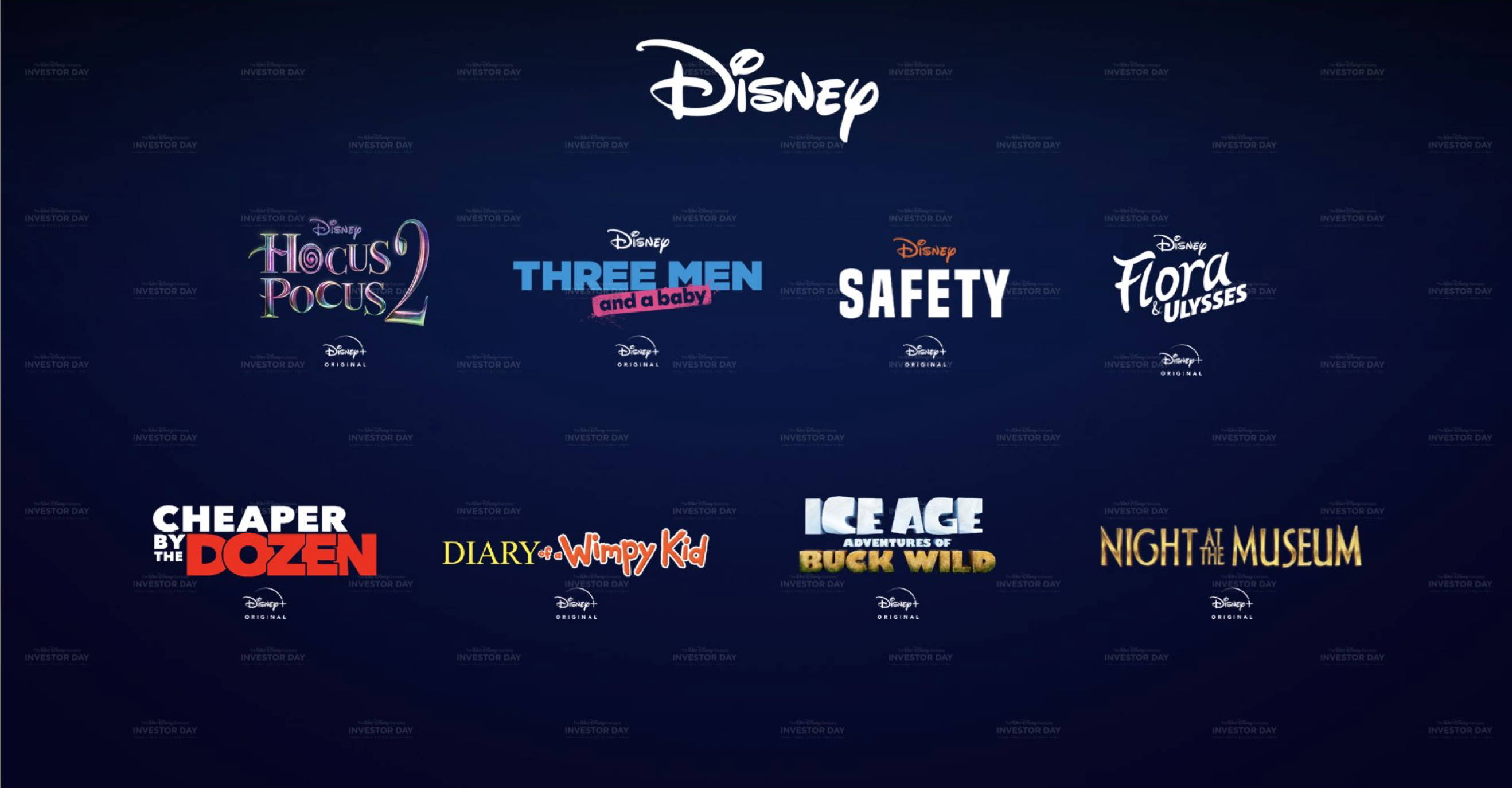 Among today’s biggest news was the reveal that Raya and the Last Dragon will debut simultaneously on Disney+ Premier Access and in theatres in March 2021. Premier Access for the title will be priced at $29.99.

We also learned today of the first-ever WDAS-produced animated series! New titles announced today, coming to Disney+, include Baymax, Zootopia+, Tiana, and Moana, The Series, as well as Iwájú, which will be produced in collaboration with the Pan-African comic book entertainment company Kugali. 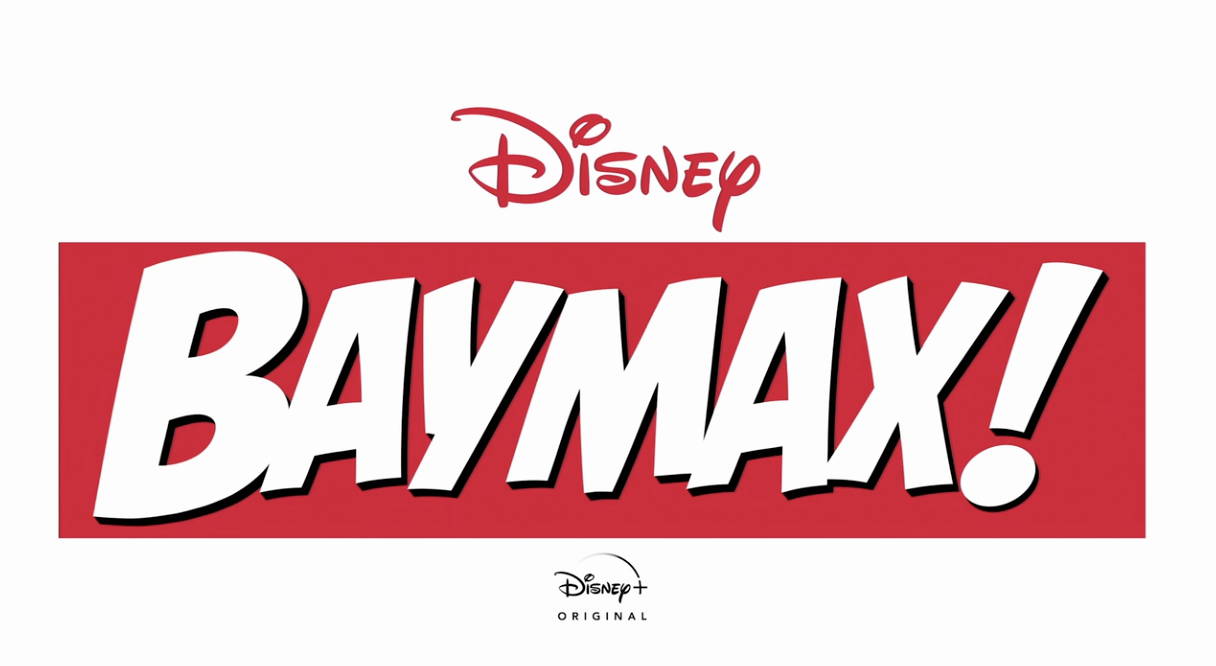 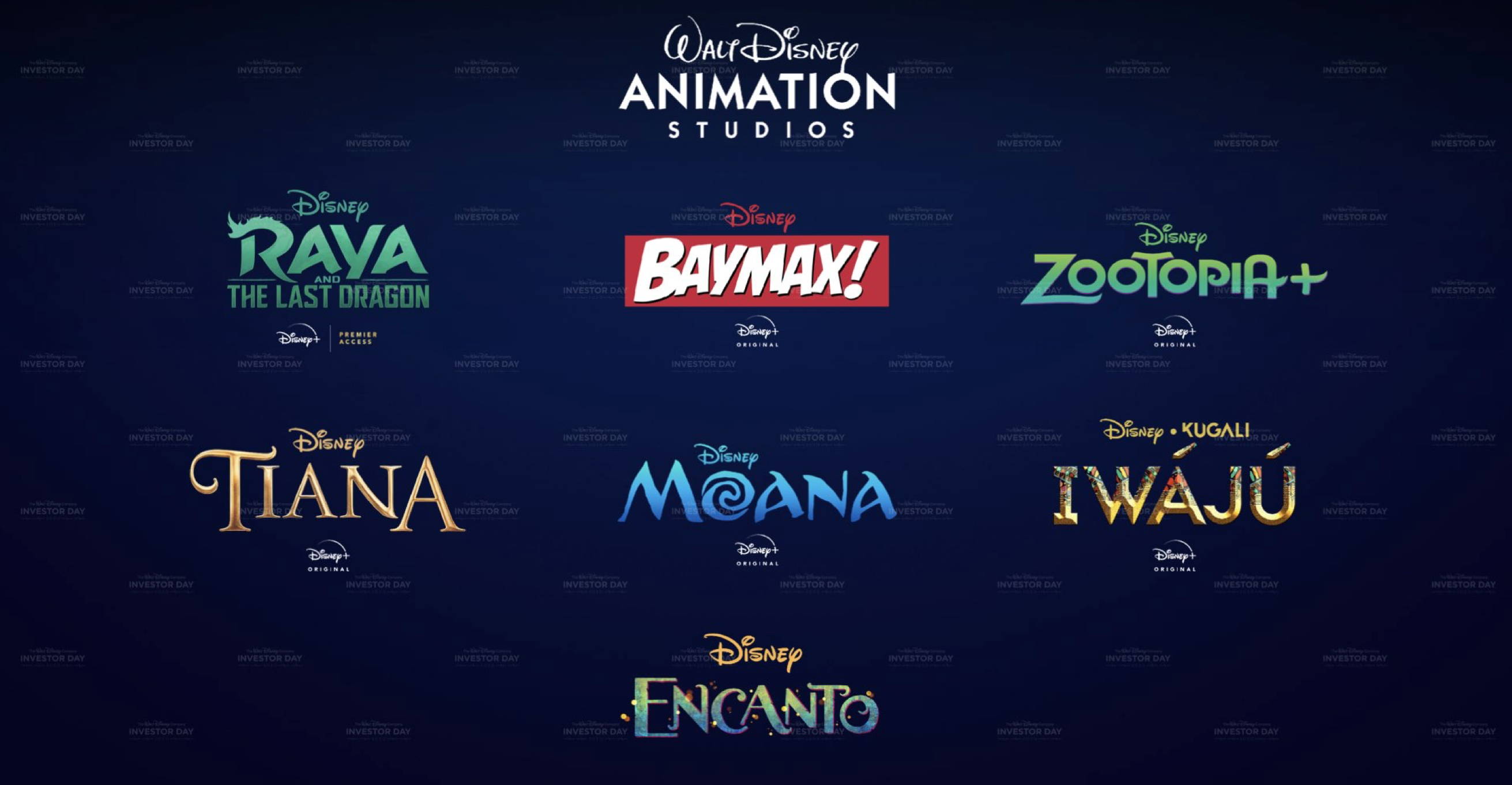 Pixar Animation Studios revealed its upcoming slate of original series for Disney+ and feature films, including:
Win or Lose, Pixar’s first-ever long-form animated series, which debuts exclusively on Disney+ in February 2023, follows a middle school softball team in the week leading up to their championship game, and each episode is told from the perspective of a different character.

Two brand-new feature films slated for theaters in 2022, Academy Award®-winning director Domee Shi’s Turning Red, and Lightyear, the definitive origin story of the hero that inspired the toy. Chris Evans will voice the hero on his journey to becoming the most famous Space Ranger ever.

In Turning Red, fans will meet Mei—she experiences the awkwardness of being a teenager, with an added twist: when she gets too excited, she transforms into a giant red panda. Turning Red comes to theaters March 11, 2022 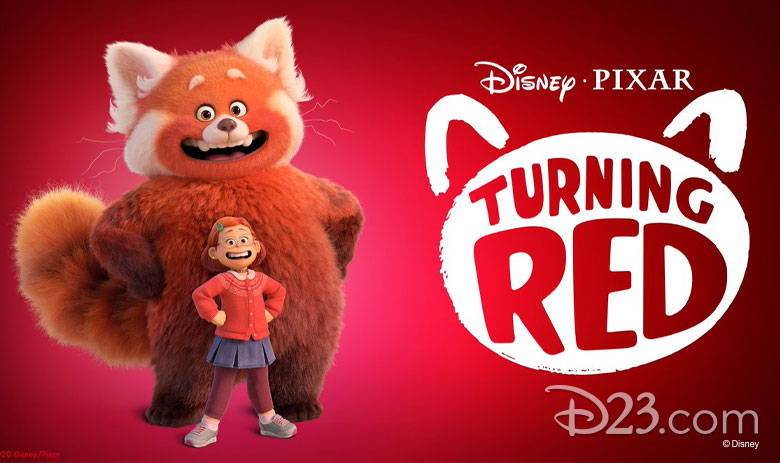 The original feature film Luca is slated for theaters next summer. Lucais a celebration of the friendship between a boy named Luca and his best friend Alberto during their unforgettable summer. You won’t want to miss Luca, diving into theaters June 2021.

Additional details were shared about new Disney+ series, including Inside Pixar, Pixar Popcorn, Dug Days, and Cars, as well as the upcoming feature film Soul and short Burrow—both debuting on Disney+ on December 25, 2020.

In the Up spin-off Dug Days, Dug discovers the dangers of suburbia like puppies, fireworks, and… SQUIRRELS!! Dug Dayswill premiere on Disney+ in Fall 2021.

Pixar is also speeding ahead with a new series following Lightning McQueen and Mater on a road trip across the country. Featuring new characters, old friends, and imaginative destinations; coming to Disney+ in Fall 2022. 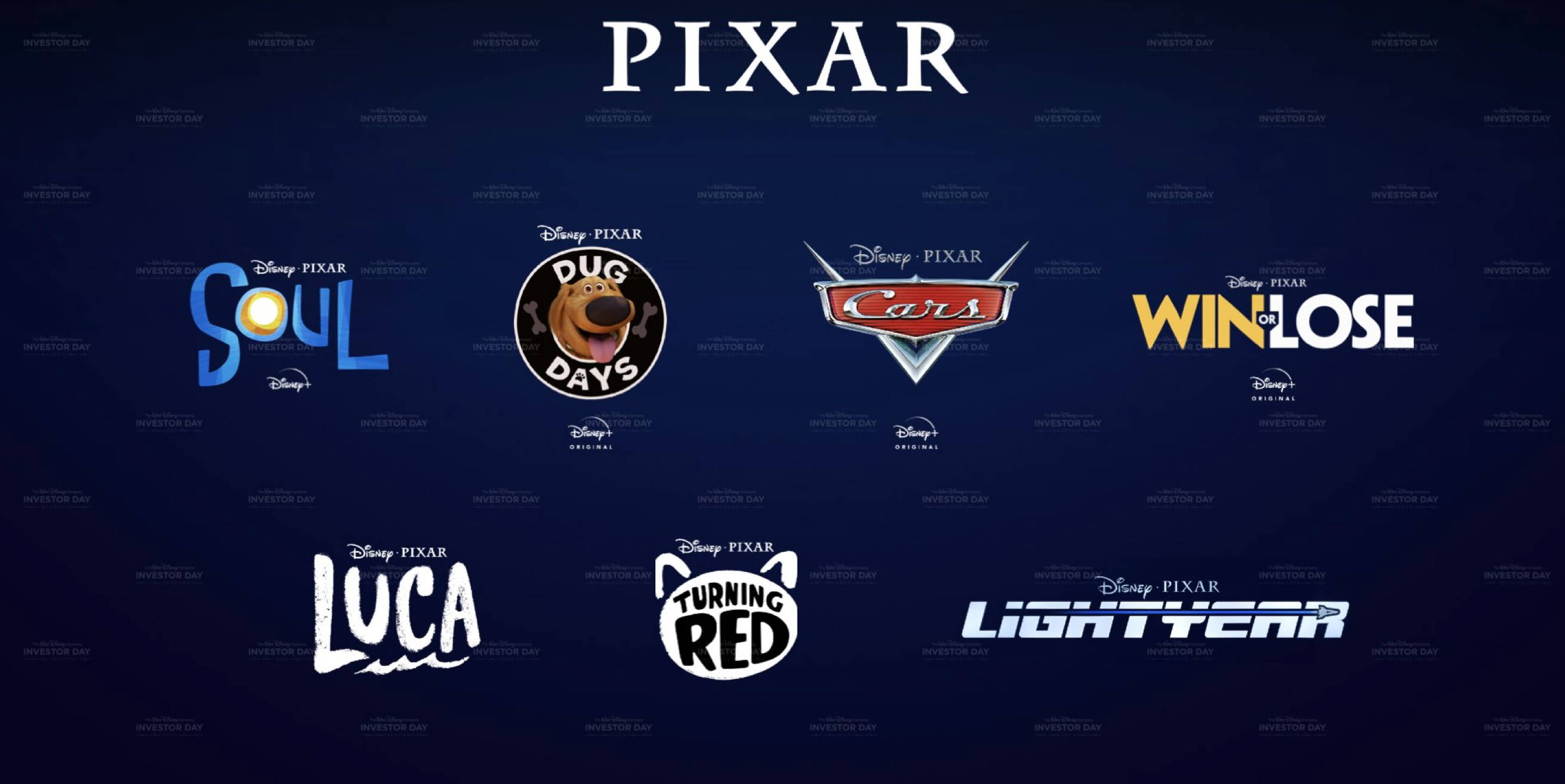 The Marvel Cinematic Universe continues to grow! Today Marvel Studios revealed details about upcoming content for both Disney+ and theaters.

These, of course, are in addition to the studios’ robust lineup of Disney+ titles that includes WandaVision, The Falcon and The Winter Soldier, and Loki; the animated series What If…?; Ms. Marvel; Hawkeye, with Hailee Steinfeld joining Jeremy Renner in the series; She-Hulk, starring Tatiana Maslany in the title role alongside co-stars Mark Ruffalo and Tim Roth; Moon Knight; Guardians of the Galaxy Holiday Special; and a series of original shorts, I Am Groot, featuring everyone’s favorite baby tree.

Today also brought the reveals of two feature films: Ant-Man and the Wasp: Quantumania, the third feature in the Ant-Man franchise; and Fantastic Four, which introduces Marvel’s most iconic family. Marvel Studios’ upcoming feature films also include Black Widow, Shang Chi and The Legend of The Ten Rings, Eternals, Doctor Strange In The Multiverse of Madness, Thor: Love and Thunder, Black Panther 2, Blade, Captain Marvel 2, and Guardians of the Galaxy Vol. 3. 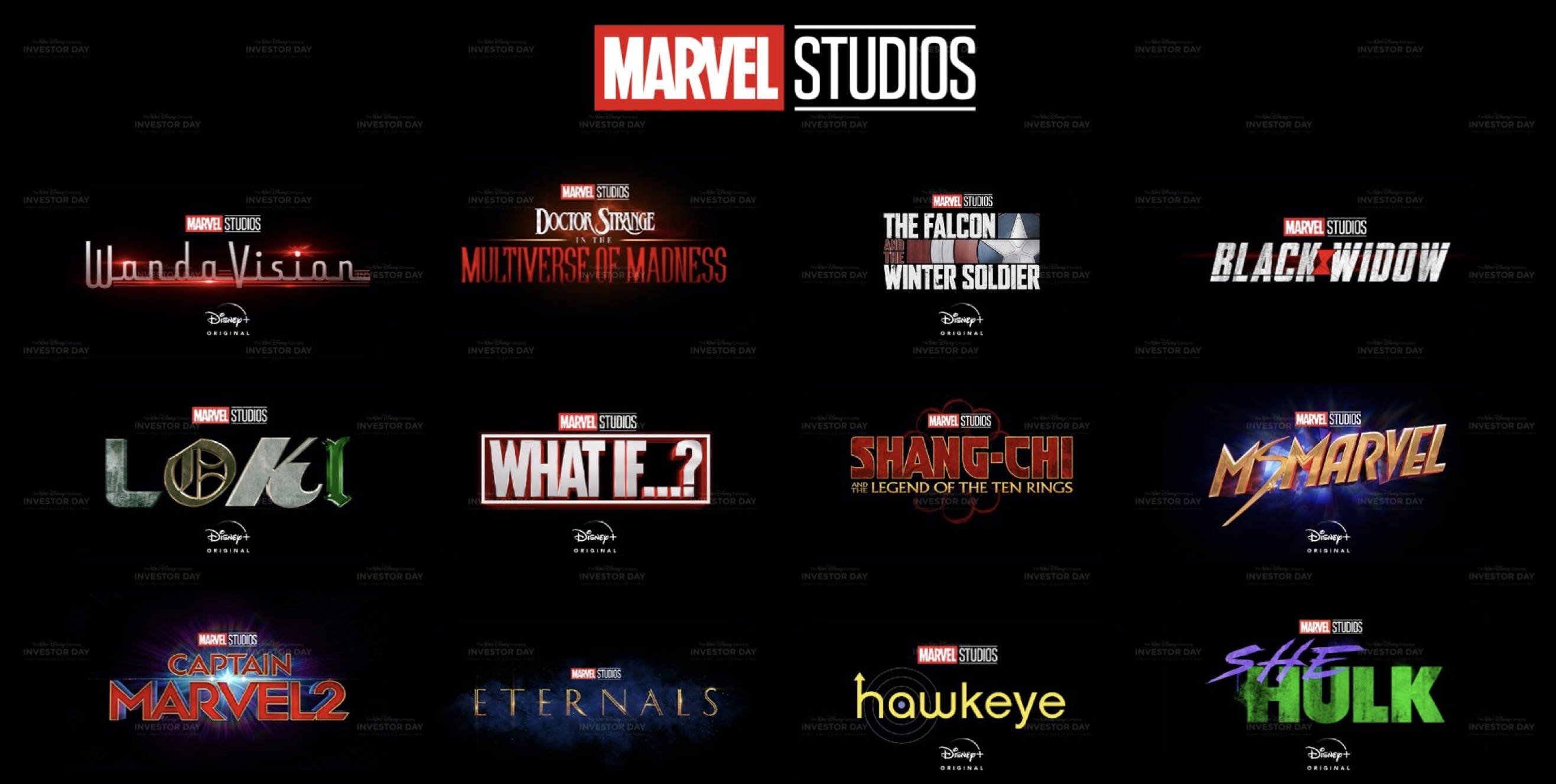 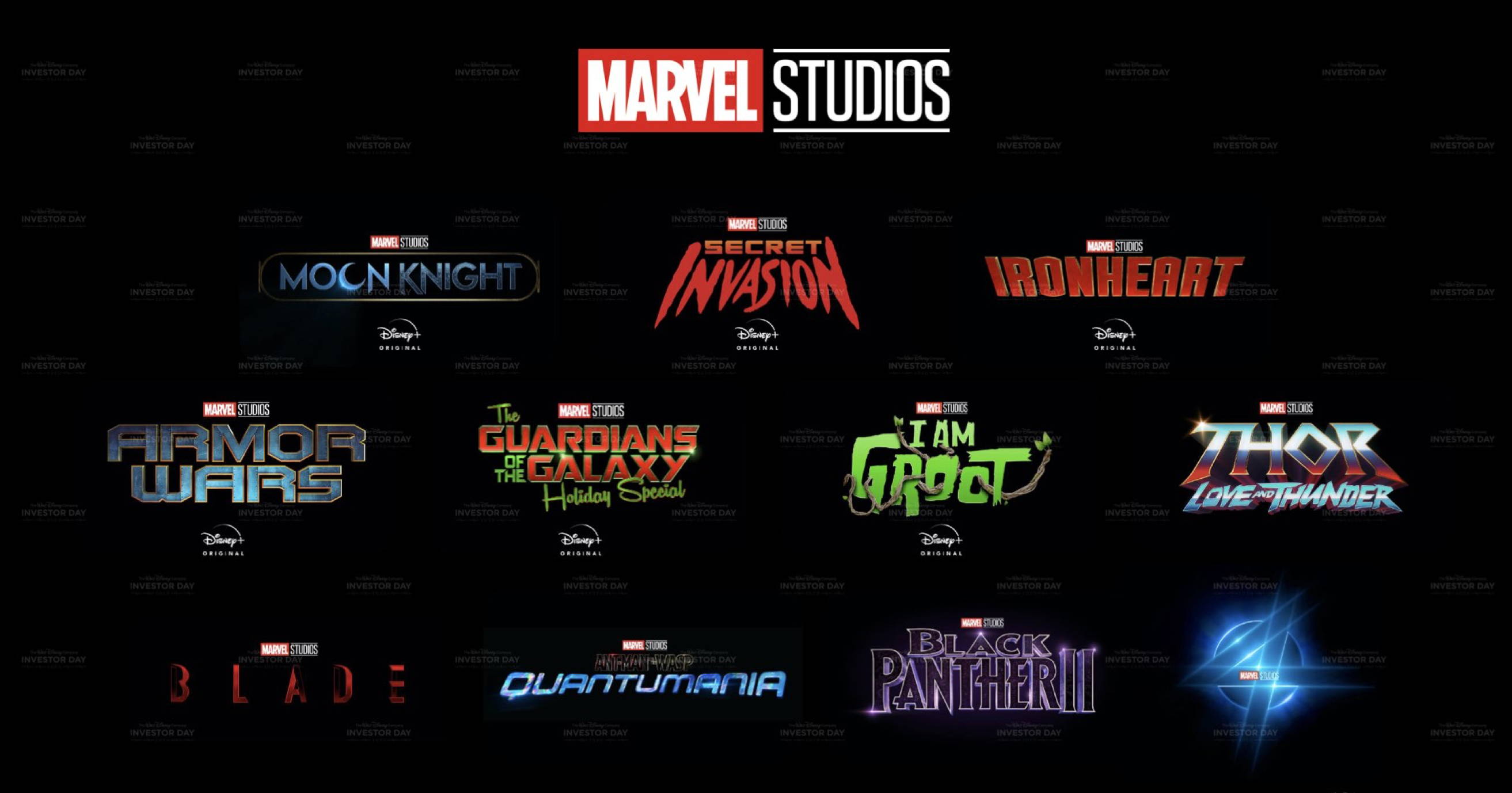 Calling all college football fans: Today, ESPN announced a milestone new 10-year agreement with the Southeastern Conference (SEC), expanding its partnership and adding college football’s most-watched TV package, beginning with the 2024 season. The deal will also bring select SEC football games to ESPN+, beginning with the 2021 football season and running through the term of the agreement. 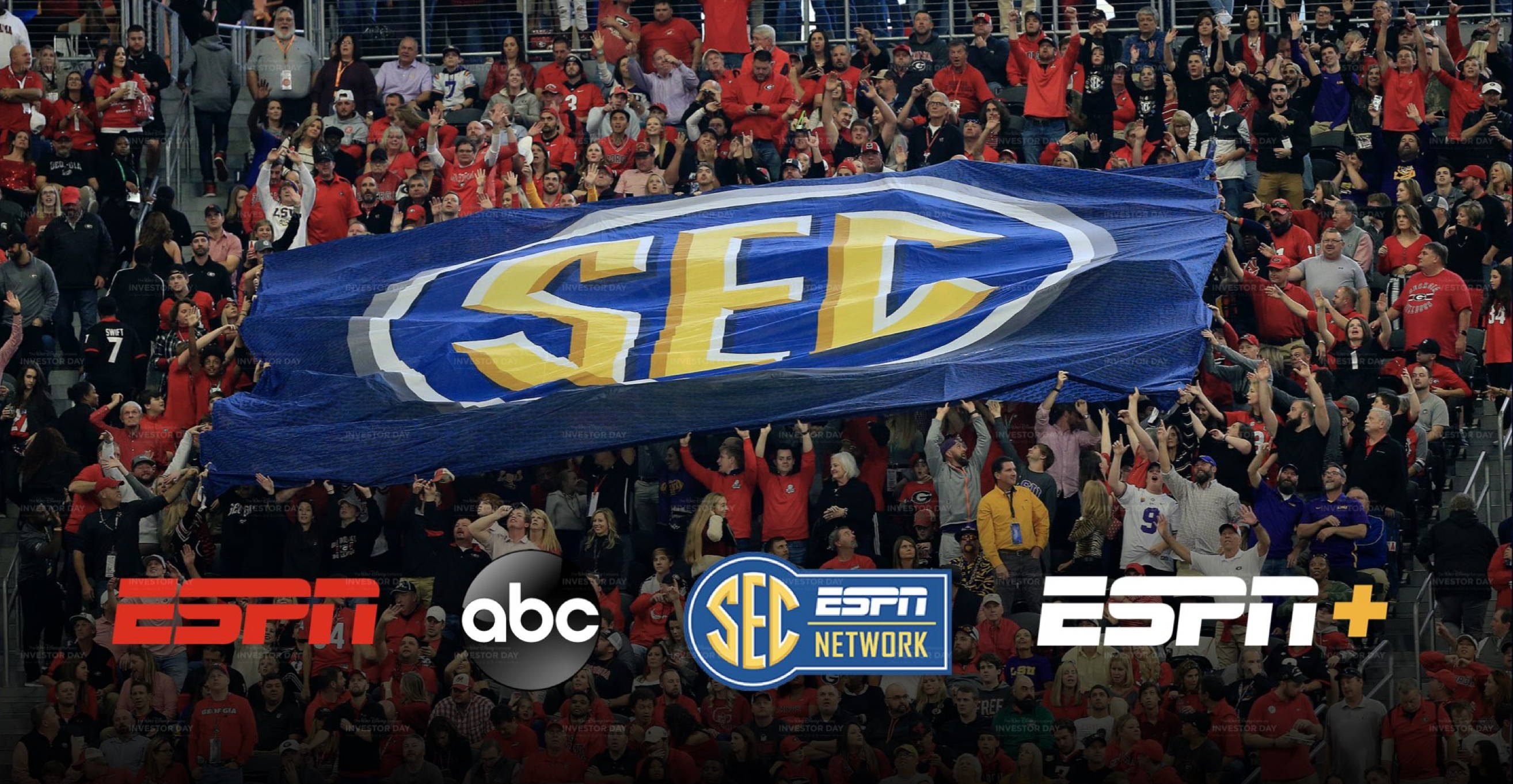 And that's it! There's a LOT of great new programming to look forward to in the future of Disney. Check out the Disney Plus sizzle reel below that recaps the future of the company and the new products that will be coming soon.