Here's a First-Look at the All-New Food Coming to Avengers Campus at Disney California Adventure!

The Trailer for Marvel Studios WandaVision is Finally HERE

At D23's Disney Plus panel in 2019, one of the most popular announcements for Disney's new streaming service was Marv...
Read More

Disney Plus Preview - Every Movie, TV Show, and Documentary Coming to Disney Plus in October

Disney Plus is holding it down in October with yet another stacked lineup of new offerings! The biggest, of course, i...
Read More

The opening date for Avengers Campus at Disney California Adventure was just announced by Disney CEO Bob Chapek. Now, D23 has released a first-look at some of the new food offerings coming to the campus! Let's take a look! 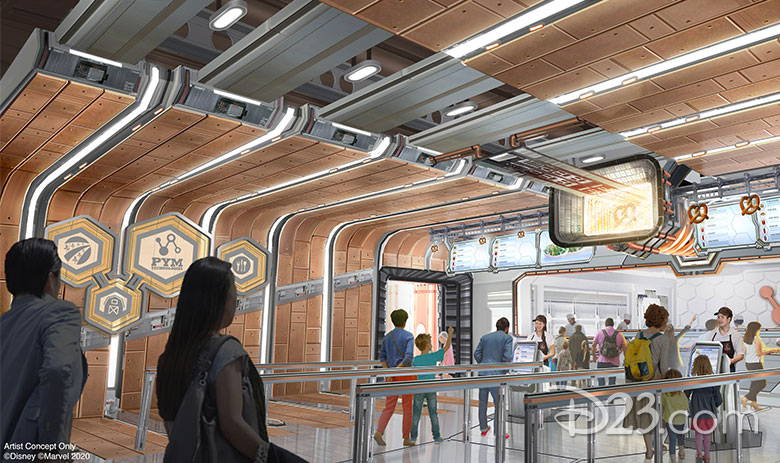 At the Pym Test Kitchen dining location, Disneyland Resort Culinary Director John State declares, “We are shrinking problems and growing solutions.” The ceiling evokes a quantum tunnel, and just below that you can watch as a conveyor belt of tantalizing Bavarian pretzels go from regular-size to ginormous. How ginormous? Served warm, right out of the oven, these pretzels weigh approximately 360 grams and are perfect for sharing. 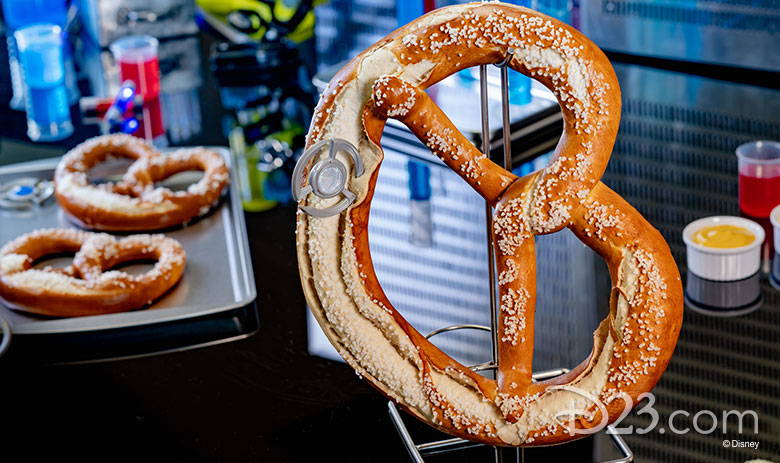 Pym Test Kitchen relies on the same technology that Ant-Man and The Wasp used to grow and shrink, well, just about anything. Here the Pym Particles lead to the creation of innovative food—traditional food at very nontraditional scale. Guests are invited to help the Pym food scientists through taste testing. We happily tried our hand at sampling the savories and sweets (in the name of science) and can report on several must-try meals at Pym Test Kitchen:

The Impossible™ Spoonful features plant-based large and micro meatballs, served in a super-sized spoon with a tiny fork. 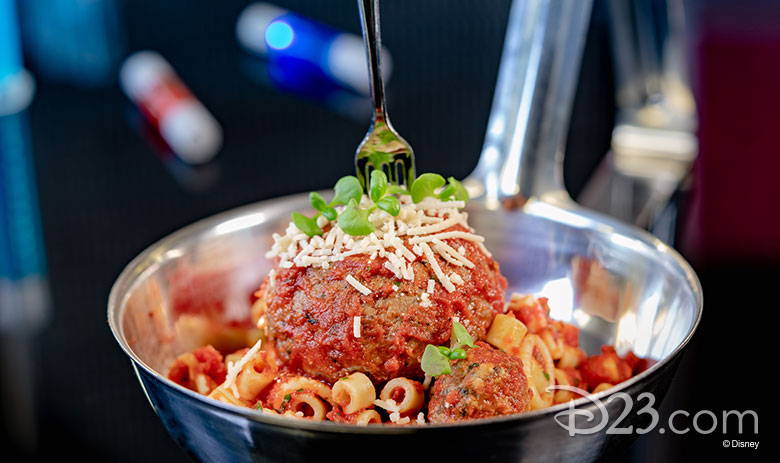 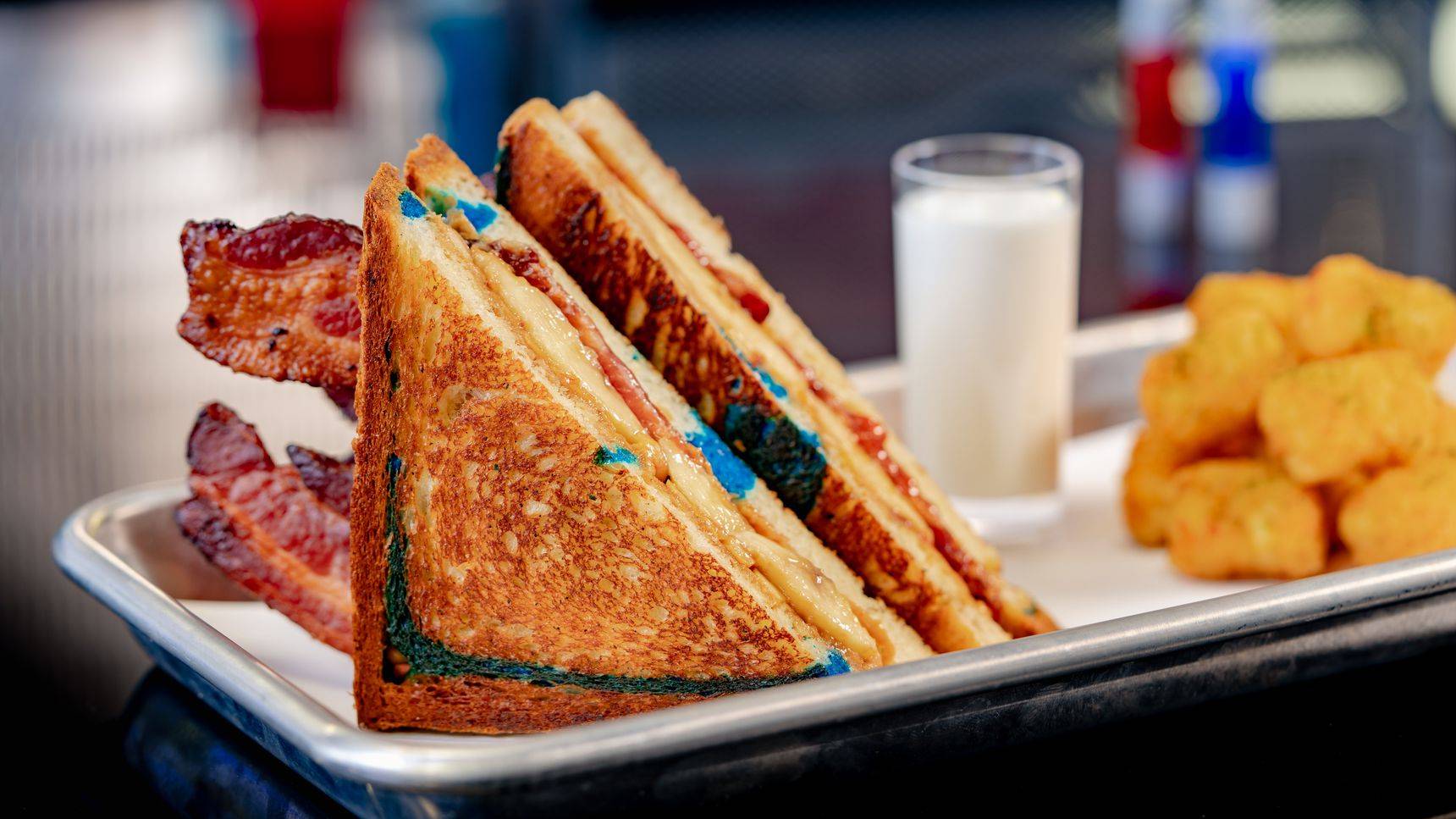 The “Pym-ini” is a hero among sandwiches. This panini on toasted focaccia with salami, rosemary ham, provolone, sun-dried tomato mayonnaise, and arugula with marinara dipping sauce, is served as both an individual-sized portion, as well as a long, multi-portion sandwich that will satisfy a hungry family or group of friends. 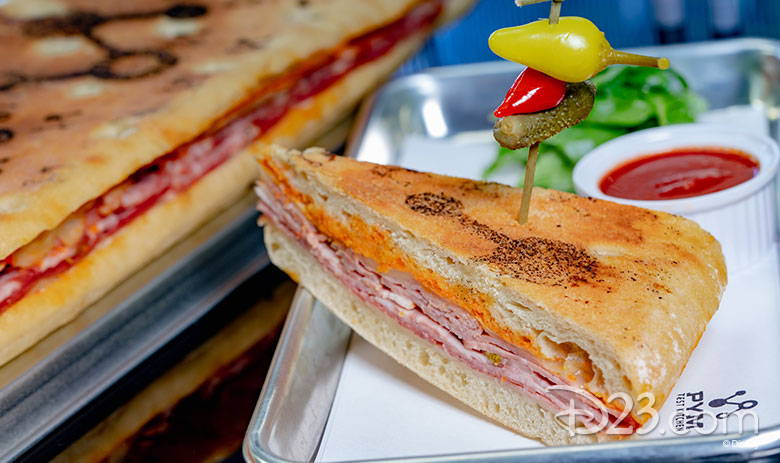 The Not So Little Chicken Sandwich was developed to satisfy guests who are looking for a high-protein, low-carb intake. A crispy breaded chicken breast has grown with the help of Pym Particles, while its accompanying bun seems to have shrunk. The sandwich is dressed with two different sauces—one slightly sweet teriyaki sauce, one slightly spicy chili sauce—and a pickled cabbage slaw. And while you may be inclined to reach for a knife and fork, State urges guests to “be adventurous” and forgo utensils in favor of their two hands. 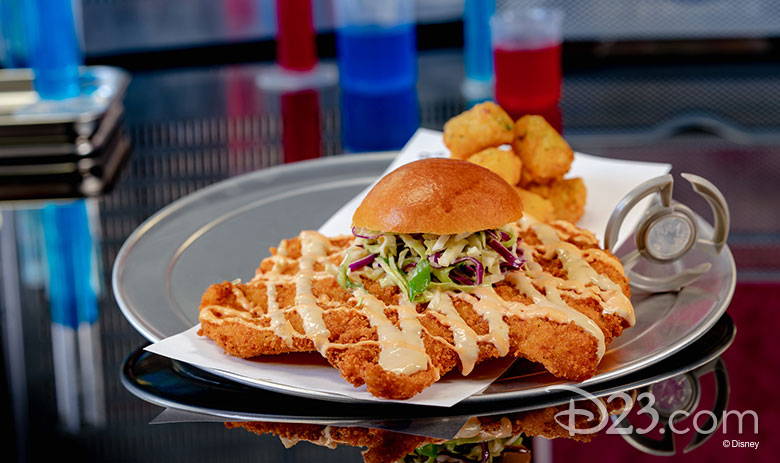 There may be no more perfect beverage to accompany any food item at Pym Test Kitchen than a refreshing cup of Pingo Doce soda (pictured above right). The distinctly green soft drink—which boasts hints of both lime and vanilla—has deep roots within the Avengers universe. Fans may remember Bruce Banner taking a job at the Pingo Doce Bottling Company way back when he was on the run in Rio de Janeiro, Brazil. 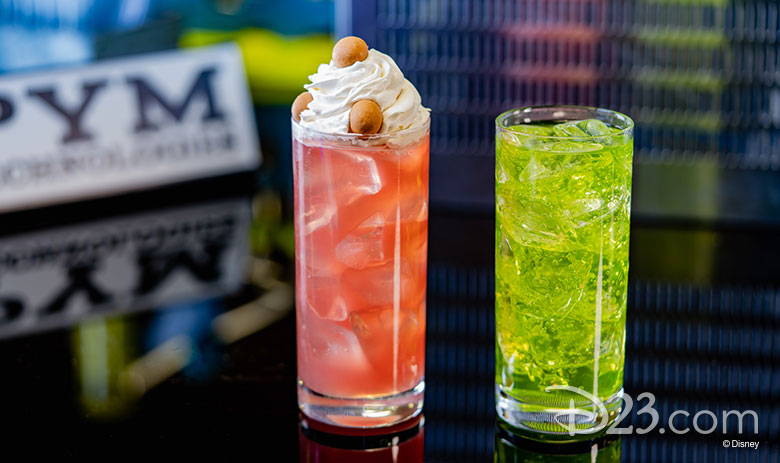 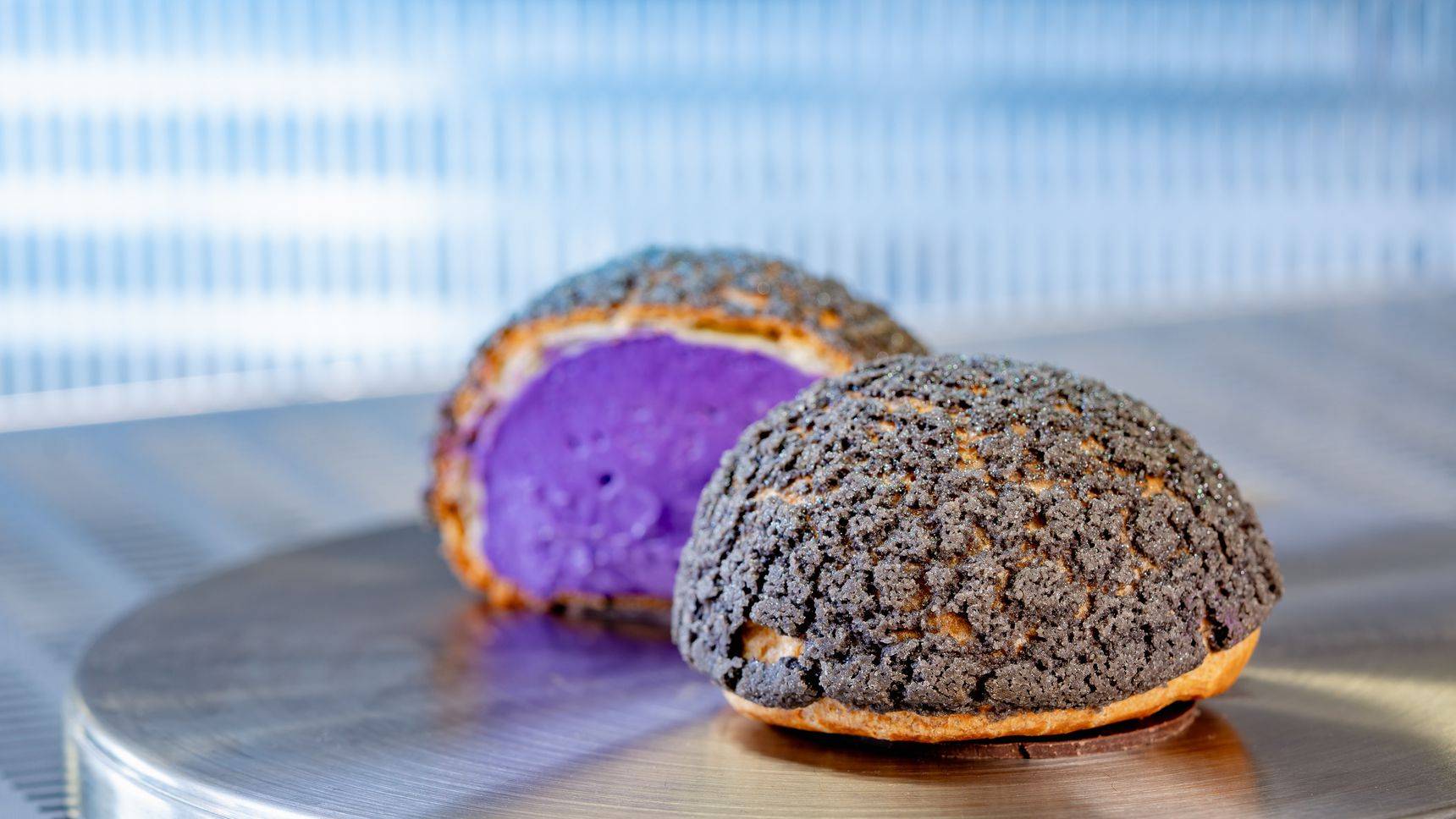 Ample outdoor seating is available at Pym Test Kitchen and offers a wonderful vantage point for Avengers activity over at Headquarters.

Just a few steps from Pym Test Kitchen, the Pym Tasting Lab represents Scott Lang aka Ant-Man’s pet project and has a focus on adult beverages. Craft beers on tap range from a blood orange hefeweizen to an amber lager, and they’re poured via an ingenious reverse draft system where the glass fills from the bottom up. The Pym Tasting Lab will feature four different beer cocktails, as well as snacks that feature big flavors but come in small, munchable bites, such as sweet and savory popped grains, mini pretzels, and salted honey-roasted peanuts. 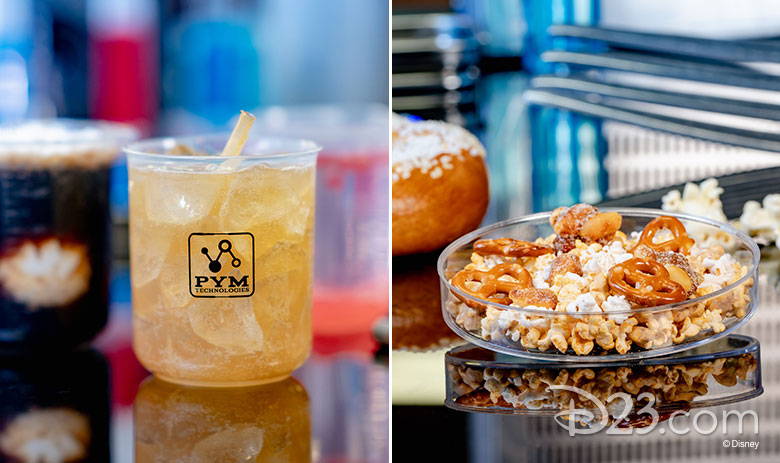 What would Avengers Campus be without shawarma? New York City’s Shawarma Palace is an Avengers favorite (and has been since they first tried the local joint following the Battle of New York). By special request of Earth’s Mightiest Heroes, the Shawarma Palace crew is opening up a location within Avengers Campus that will serve a fragrant chicken shawarma and garlic sauce, as well as an Impossible™ plant-based falafel version. Look for the cart that’s decked out with Avengers memorabilia. 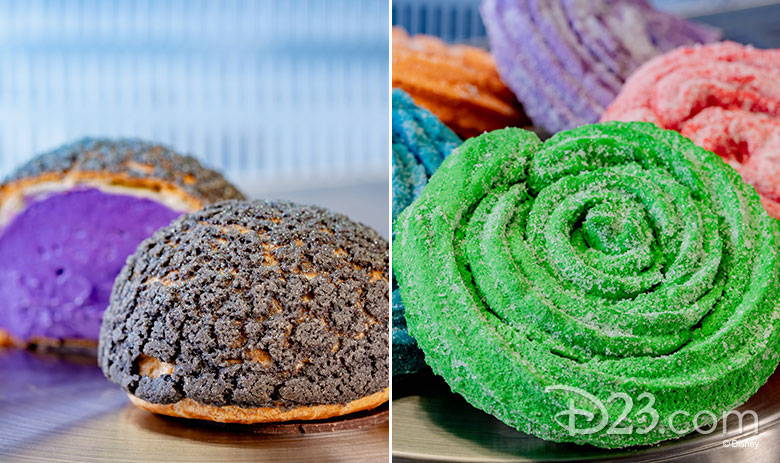 If you’ve already been fascinated by the unique collection Taneleer Tivan has curated in his fortress and on display at Guardians of the Galaxy – Mission: BREAKOUT!, prepare to be tempted by his equally enchanting assortment of intergalactic eats and treats at this food cart. The Cosmic Cream Orb resembles an Infinity Stone, but it has the flavor of a delectable cream puff filled with raspberry cheesecake mousse.

Terran Treats will also feature a changing variety of colorful Sweet Spiral Rations, which look and taste like what we have come to know and love as a churro.

That's your first look at all the incredible new food locations and food that will be available when phase 1 of the Avengers Campus opens on July 18th, 2020! What will you be trying first? Let us know in the comments below!

The Trailer for Marvel Studios WandaVision is Finally HERE

At D23's Disney Plus panel in 2019, one of the most popular announcements for Disney's new streaming service was Marv...
Read More

Disney Plus Preview - Every Movie, TV Show, and Documentary Coming to Disney Plus in October

Disney Plus is holding it down in October with yet another stacked lineup of new offerings! The biggest, of course, i...
Read More

Rosh Hashanah is the celebration of the Jewish New Year and some of our favorite Disney Channel stars got together fo...
Read More
Back to The Lost Blog
Use left/right arrows to navigate the slideshow or swipe left/right if using a mobile device
x