Here's EVERY Location You Can Get a Dole Whip at Disney World!

NOTE: 100% of ad revenue from this article will be donated to charities that fight everyday for racial equality in Am...
Read More

What's up Dole Whip Daddies and Baddies! If you haven't heard, our Dole Whip Daddy collection is dropping TODAY and to celebrate, we thought we'd show you EVERY SINGLE location you can get one of the most iconic snacks at Disney World, the Dole Whip! There are more locations than you might think, so let's get started!

dole whip daddies and baddies….UNITE!! WE ARE SEEN!!!!! DOLE WHIP DADDY for ladies and gents are coming in hot on Monday in all sorts of awesome options: the rock ’n’ roll wash, pink dad(dy) hats (small quantity), and THE SWAG BUCKET HATS!!!!!(even smaller quantity).we’ve been hanging on to this one forever waiting for Spring Break to come along because these pieces are too much of a vibe. we’re gonna rock em all over MK while sippin’ Whips, on boats, and in our Dole Dreamzzz. We also will be dropping ONLY 25 DW inspired tie dyed versions of these that me, Lex, and Jambo did ourselves which you can see in our story now lol. shout out to THE original dole whip daddy @iamjrichardson for blessing us with this amazing idea, thank u for making this happen for us!!! this monday at 10 am im excited to watch these babies disappear and see them all over the parks!!

The classic Pineapple Dole Whip has been a Disney staple since 1968 when the Dole Company took over the sponsorship of the Enchanted Tiki Room attraction. Since then, the snack has gained a cult following (which we are a part of) and has inspired all kinds of new and unique flavors, combinations, and variants which we'll talk about more soon!

At Aloha Isle in Adventureland, you'll find the classic version of the Dole Whip served as either just Pineapple, Vanilla, or a swirl of both. In August of last year, the location also rolled out a new Souvenir tiki bowl option for a really great value of $9.99, however that option is NOT available on the Disney Dining Plan. Throughout the menu, you'll also find other variations of the Dole Whip such as the Raspberry-Pineapple Swirl Dole Whip, and the current limited-time offering, the Kakamora Float, with coconut soft-serve. Ultimately, this is the original Dole Whip location, this is where it all began!

Disney continued capitalizing on the Dole Whip with Rum craze by adding it to the menu at Tamu Tamu Refreshments in Africa at Animal Kingdom. There, they offer the Dole Whip in a cup, and make it an option to add regular or dark rum for an up-charge. They also now feature the Simba Sunset, which features Dole Whip with Watermelon, Strawberry, and Coconut flavored syrup.

Once again Capitalizing on the Dole Whip with Rum craze, the Marketplace Snacks Booth offers the Dole Whip Cup or Float, with the option to add rum. There have also been specialty items offered around Disney Springs property such as the Dole Whip Nachos, and various Dole Whip alcoholic beverages at Wine Bar George.

At the Polynesian Resort, Dole Whip and Pineapple Floats can be found at the Pineapple Lanai, with the option to add rum. You can also get the souvenir tiki bowl from Aloha Isle here too. At Trader Sam's, they serve the Spikey Pineapple, which is another version of the Dole Whip with rum. It's important to not that it's unclear if the Spikey Pineapple is vegan-friendly or not! Finally, at Barefoot Pool Bar, they serve a Frozen Margarita with Lime Dole Whip tequila, and chili-lime seasoning, and a Frosty Pineapple with Captain Morgan Private Stock Rum.

At the Boardwalk, Joe's Marvelous Margaritas serves up Dole Whip Smoothies called the Captain's Seaside Sensation. Both alcoholic and non-alcoholic versions of the drink are available so everyone can enjoy!

Typhoon Tillts also offers Dole Whip Cups with the option to add Coconut Rum. This is the only location you can get Dole Whip at a Disney water park!

Over at the value resorts, Silver Screen Spirits Pool Bar features the Dole Whip Smoothie and also features the option to add alcohol.

Can You Purchase Dole Whip With A Disney Dining Plan?

Most non-alcoholic Dole Whip treats count as a Snack Credit on the Disney Disney Plan. Some of the more complex options or versions with novelty cups may not qualify.

Is Pineapple Dole Whip Vegan / and or Gluten-Free?

Yes! Dole Whip has been made with vegan ingredients since 2013 and has always been gluten-free. Just be sure to ask your server at Trader Sam's about the Spikey Pineapple as that one is TBD with the vegan ingredients.

That's EVERY place you can get Dole Whip on Disney World property! Don't forget, there are also locations at Disneyland and internationally that you can get the infamous treat, so you don't necessarily have to book a trip to Orlando just to get your hands on one. Disney seems to be creating and trying out an abundance of new, unique flavors and combinations of the Dole Whip, and we're always looking forward to trying what they come up with next! What's your favorite type of Dole Whip? Let us know in the comments below! And be sure to check out our Dole Whip Daddy collection launching TODAY and use the promo code below for 10% off your purchase! Be sure to also check out our other Lost Bros Monday releases for this week, the Monorail Long Sleeve Re-stock and the highly anticipated Snack Pack Backpack! 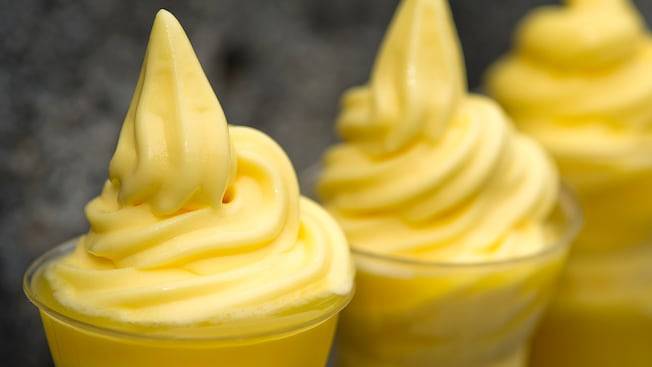 NOTE: 100% of ad revenue from this article will be donated to charities that fight everyday for racial equality in Am...
Read More

Disney Channel has released the first-ever Baymax and Launchpad McQuack crossover short on Youtube, as part of Disney...
Read More
Back to The Lost Blog
Use left/right arrows to navigate the slideshow or swipe left/right if using a mobile device
x